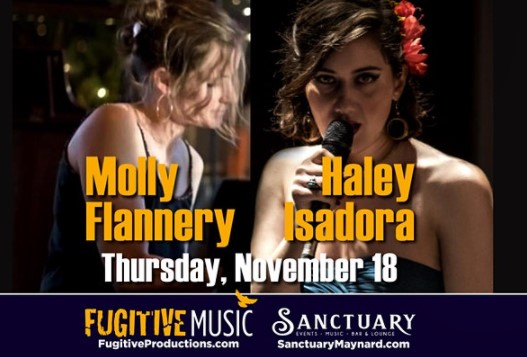 When Molly and Haley met, they instantly became musical soulmates. They discovered their shared love of jazz standards and Brazilian music — and their admiration for Joni Mitchell and Laura Nyro. Join them as they do what they do best — perform the music they love, from the heart.

Composer, arranger, and keyboardist Molly Flannery is known for her distinctive touch on the piano, her melodic improvisations, and her ability to groove in jazz, latin, and Brazilian idioms. After studying composition, improvisation and theory at Yale, Molly began her performing career in Japan where she appeared frequently at local clubs. When she eventually settled in Boston, she studied jazz with Ran Blake, Charlie Banacos, Kenny Werner, Harvey Diamond, and Doug Johnson. Her CD releases include ”Slow Dance at the Asylum” and “Riding the Bull.”

Singer/Composer Haley Isadora grew up in Lincoln and recently moved back from Brazil where she lived for several years. While immersing herself in Brazilian music, Haley also strove to bring the U.S. sound to her adopted country. Her last project abroad, a tribute show to the 100 years of Ella Fitzgerald, received critical and public acclaim in Brazil. In 2016, she was awarded first place in the Popular Singing Competition at the São Paulo School of Music. Haley continues to seek new cultural connections between American jazz and Brazilian music, highlighting women composers.