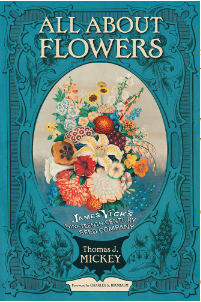 Nineteenth century seed company owner James Vick (1818-1882) believed in being fair and honest with his customers. That ethical stance inspired his communication methods with his customers at a time when business owners thought ‘hype’ was essential.

Vick had been an editor and writer before his seed business.  He wrote his catalog and monthly magazine with words inspired with what would most help his customers.

The new book All about Flowers: James Vick’s Nineteenth-Century Seed Company illustrates how this nineteenth century seed company influenced both gardeners and the kind of garden that became essential, the Victorian flower garden.

The second half of the nineteenth century made possible a media-driven garden which included what the garden should look like, where it should be in the home landscape, and what plants ought to be in it.  The seed catalogs, garden magazines, and horticultural papers of the day suggested the plant varieties and indicated where to plant them in the garden.

James Vick’s story has not been told yet. He is known in his hometown Rochester, New York but he played a key role in gardens everywhere in nineteenth century America, whether of the wealthy, the middle class, the working class, or the city dweller.  Vick inspired gardeners everywhere with his own passion for gardening with flowers and his desire to spread the love of floriculture

Vick published yearly seed catalogs and a popular monthly garden magazine.  He systematized the seed business: growing seeds, drying them, packaging them, and shipping them around the country, well before both Sears and Montgomery Ward sent out their first catalog.

The eighteenth-century gardens of England included flowers that became popular in the nineteenth century Victorian garden as well.   Vick sold many of the same flowers. They continue to be essential in today’s flower garden. The list includes garden favorites like the geranium, nasturtium, lobelia, dahlia, morning glory, and hollyhock. They are among the Victorian flowers that remain our favorites.