Author Talk with Anders Morley: This Land of Snow 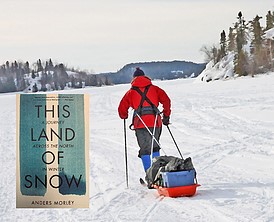 Anders Morley will be discussing the journey that inspired his book, This Land of Snow: A Journey Across the North in Winter, as well as reading excerpts, sharing photographs, and answering questions.

Every journey begins with a single step, or in Anders Morley’s case, the shush of cross-country skis. For as long as he could remember, Morley dreamed of taking a very long walk. In his thirties, happily married and living in a faraway country but pining for the silent and snowy winters of his New Hampshire home, he decided to unite his old dream with his equally long-standing love of winter. Fourteen months later, just as the snow was starting to fall, he set off alone to spend the four coldest months of the year traveling on skis across the half-wild country of northwestern Canada.

This Land of Snow tells the story of that journey and of a man who must come to terms with the consequences of living by nostalgia. It is an honest, thoughtful, and sometimes humorous reckoning of an adventure filled with adrenaline and exuberance, as well as mistakes and danger. Both a celebration of a season and a portrait of a place, the book affords readers fascinating and insightful glimpses into life at the edge of the great northern wilderness, the history of cold-weather exploration and nordic skiing, the right-to-roam movement, winter ecology, and more. Throughout, Morley’s clear, subtle, and self-deprecating voice speaks to a backwoods-genteel aesthetic that explores the territory between wildness and refinement, language and personal story, journey and home.

“A captivating memoir about backcountry adventures and one man’s journey of self-discovery—and an eloquent ode to the harsh beauty of winter.” —Booklist (starred review)

“A thoughtful and inspiring account . . . Morley weaves together human and natural history with skill. Those with a taste for adventure and an appreciation for nature’s gifts will enjoy this moving expedition.” —Publishers Weekly

A dual-citizen of the US and Canada, Anders Morley grew up in New Hampshire and began skiing at age five. He contributes regularly to New Hampshire magazine and his work has appeared in a variety of other publications including The Globe and Mail, Northern Woodlands magazine, and The Aurorean. Morley lives in northern New Hampshire.

Books will be provided for sale at the event by Porter Square Books. Purchase online instead here.