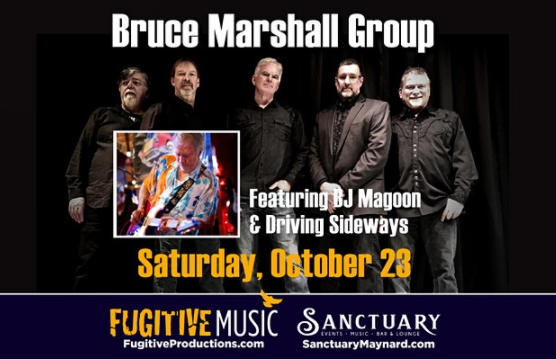 Bruce Marshall and BJ Magoon performed regularly at The Sit’n Bill Pub in Maynard over its 20-plus year lifetime. Tonight BJ & Bruce are celebrating their long friendship — and the Sit’n Bull Pub!

Singer, songwriter, and guitarist Bruce Marshall has been a full-time musician his entire adult life with over 9,000 shows to his credit. He has opened for more than 200 national acts including James Brown, BB King, Chicago, The Beach Boys, Bryan Adams, Gregg Allman, Blood, Sweat, and Tears, Commander Cody, Kenny Loggins, Ginger Baker, The Doobie Brothers, Boz Scaggs, and Joe Cocker.

With an affinity early on for blues, rock and ’60s pop, Marshall honed his chops in the gin mills of New England, starting with Whitecap, a popular area band that gigged nonstop for seven years. He put out his first album with his band, The Clue, in ’87 and went national with guitarist Toy Caldwell (Marshall Tucker guitarist/founder) in ’89, touring the US with Charlie Daniels, Lynyrd Skynyrd, and the Outlaws.

With many awards to his credit, in 2018, Marshall created his seventh record, “Borrowed Time,” to rave reviews.

BJ Magoon grew up in Acton and has been performing since his teens. At a ripe young age, BJ joined blues guitarist Luther “Georgia Boy” Johnson, a recent transplant from blues legend Muddy Water’s Band which led to performances with Muddy Waters and James Cotton, among others. In the ’80s, BJ formed Driving Sideways, whose repertoire of roots-based music includes Blues, Roots-Country Rock, Swing andSoul (with an emphasis on the groove). Over the years, he has opened for Bo Diddley, Delbert McClinton, Roy Buchanan, Lonnie Mack, The Holmes Brothers, Kenny Neal, Albert Collins, Roomful of Blues, Duke Robillard & The Pleasure Kings, and Ronnie Earl & The Broadcasters. In the ’90s, BJ produced and hosted a weekly radio show, “Blues On The Ceiling” and, for 14 years, he hosted the popular, weekly “Thursday Night Blues Jam” at The Acton Jazz Cafe.