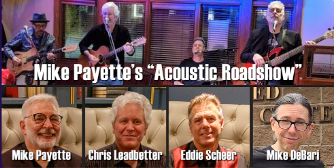 Acoustic Roadshow plays acoustic versions of the harmony-rich songs many of us grew up with (The Beatles, CSNY, Steely Dan, The Beach Boys). This quartet of seasoned performers showcases both the vocal and instrumental talents of each of its members.

Mike Payette
With a musical career spanning decades, Mike is a well-respected member of the Boston musical community. His bass playing and strong vocal ability are always in demand. Acoustic Roadshow is the latest chapter in his musical story. In addition to his years of live performance experience, Michael has sung on numerous radio and TV ads in the Boston market. (Does “1-800-54-GIANT” or “We’re the One for You New England, New England Telephone” bring back any memories?)

Chris Leadbetter
An accomplished guitar and mandolin player, Chris is known for his voice, notably singing harmonies. For more than 20 years, he was a core member of a popular cover band, The Swinging Johnsons, playing clubs and private functions around New England. He has also been featured on recordings and performances with local songwriters Kat Chapman and Digney Fignus.

Eddie Scheer
Drummer and vocalist Eddie Scheer has been one of the pillars of the Boston Blues/R&B scene for more than 20 years. As the leader of his award-winning band The Love Dogs, he’s toured the U.S. and Europe and recorded four critically acclaimed CDs. He’s played with virtually every top-level musician in the Northeast at one time or another, and has hosted his “Tuesday Night Allstars” series in Brighton for more than a decade. His encyclopedic repertoire is surpassed only by his big smile and love of entertaining.

Mike DiBari
Boston-based jazz blues guitarist Mike DiBari is inspired by B.B. King and Freddie King, among others. He began his studies at the Manhattan School of Music in New York, and in 1994, he earned a bachelor’s degree from Berklee, studying with Jon Damian, Jim Kelly, and Jon Finn. After forming the Mike DiBari Swingtet, he formed the Palomino Records label and released his debut album, Jumpin’ the Blues (1997). His next two albums, Rotary Ahead! (2003) and Music of the Spheres (2007), featured the Mike DiBari. Mike continues to perform live with many local and national blues and R&B artists including Mud Morganfield (Son of Muddy Waters) and Boston’s own Toni Lynn Washington.