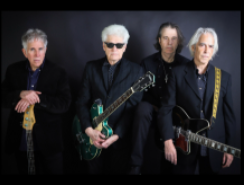 The Nervous Eaters are an original rock and roll band from Boston, MA who helped define the Boston underground garage/punk rock scene of the late seventies. Fueled by the raw sounds of Link Wray, early Chicago Blues greats and British guitar legends Beck, Clapton and Page, the band created a raw edgy song style uniquely their own.

The band debuted in March of 1976 at the legendary nightclub “The Rat” in Boston. They released their first of two singles for Rat Records that included the hit song “Loretta” which became one of the city’s most endearing rock and roll anthems.

Ric Ocasek of The Cars produced a demo for the band, that resulted in them being signed by Elektra Records with a nationally released album in 1980. They were one of the more popular rock & roll bands in the Northeast, opening for numerous National Acts and eventually headlining at venues throughout the United States and Europe.

Justine and the Unclean have released two critically acclaimed albums: 2017’s Get Unclean and 2018’s Heartaches And Hot Problems, plus a stream of power-pop punk singles injected with a dash of hard rock in 2020 through 2022.

Fireking is a three-piece rock and roll band based in Boston, with roots in Detroit. Founding member Anthony Kaczynski (vocals/guitars). ex-Figures on a Beach, is joined by Drew Morrison and John Sheeran on bass guitar. and Jonathan Screnci on drums. They’ve just released their second album, “Double Trouble,” 22 songs of pure unadulterated rock!

A photo I.D. and proof of vaccination (or negative covid test taken from a medical institution within 72 hours of the event) required for entry. Read full Covid policy here

ACME Theater presents Do Not Disturb Scroll to top