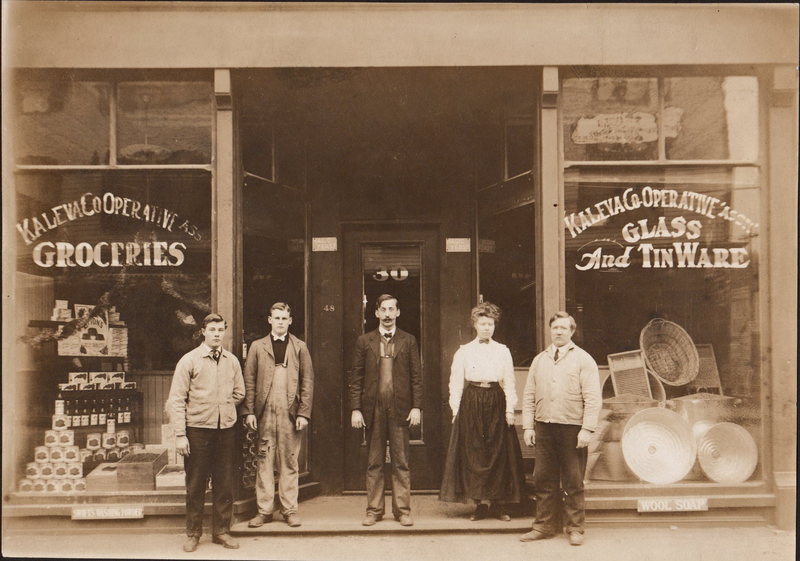 On December 14, at 7:00 p.m., the Maynard Public Library will present a Zoomed talk titled: “Food Cooperatives.” Register (free) at https://www.maynardpubliclibrary.org/may150 . This is the eleventh (and last) in a monthly series of history lectures produced by the Sesquicentennial Steering Committee as part of Maynard’s celebration of the 150th anniversary of its creation on April 19, 1871. A new history book “MAYNARD MASSACHUSETTS: A Brief History” is for sale for $21.99 at 6 Bridges Gallery, 77 Main Street, WED-SAT, 12-5.

Maynard author and historian David Mark will speak about the long and storied history of food cooperatives that existed in Maynard, from oldest, to most recent, to possible future. With the grandiose name “Order of the Sovereigns of Industry,” the first co-operative society opened in 1875. Renamed “Riverside Co-operative Association,” it lasted to 1936. Newly arrived Finnish immigrants asked that Riverside hire Finnish-speaking staff. Rebuffed, they started the Kaleva Co-operative Association, later to become the United Co-operative Society of Maynard. In time, United added a bakery, diary delivery, ice delivery, a fuel oil company, gas station and credit union. At one point in time United was one of the ten largest co-ops in the country. Kaleva/United was in business 1907-1973, closing after the immigrant descendants assimilated and moved away. Home to a food co-op again? As of fall 2021, the Assabet Co-op Market has raised more than $1.5 million dollars and is actively searching for a site.

ACME Theater presents Cry It Out

ACME Theater presents Cry It Out Scroll to top