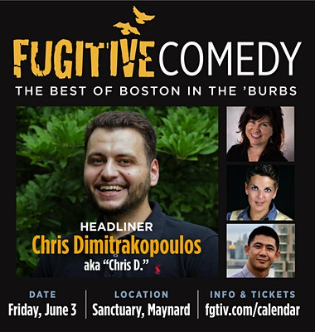 Headliner Chris Dimitrakopoulos (aka Chris D.) — With his blend of jokes about his quirky, immigrant family and his unique perspective on the world around him, Chris is one of the nation’s rising, young talents. He has been a standout at The Beantown Comedy Riots, The Boston Comedy Festival, and The Burbank Comedy Festival in LA. In addition to regularly opening for national headliners like Juston McKinney and Lenny Clarke, Chris once held the prestigious title of “Comic in Residence” at the famous Comedy Studio in Cambridge. Showtime producers chose Chris to be the East Coast warm-up comic after his appearance on Rob Gronkowski’s “Unsportsmanlike Comedy.”

Kristin O’Brien has been entertaining audiences in New England and Texas for 13 years.  She has performed at festivals across the country including The Ladies of Laughter festival in NYC, Boston Comedy Festival’s The Dirty Show and Comcast’s Trial By Laughter which aired in spring 2017.  Auntie Kristin’s perspectives on marriage, children, divorce will keep you in stitches!

Peter Liu is a rising Boston comic. He majored in chemical engineering and minored in sadness. Now he makes drugs by day and laughs at night. He’s been featured on Don’t Tell Comedy and Amazon Prime. He was a semi-finalist at the Boston Comedy Festival, Last ComiX Standing, and finalist at New England’s Funniest Comic Contest. He performs regularly across New England at clubs including The Comedy Studio, Comedy Connection, Chunky’s, Headliner’s, and McCue’s Comedy Club. He has performed nationally at the Comedy Store (La Jolla), Broadway Comedy Club (passed), St. Mark’s Comedy Club, the Comedy Chateau, WestSide Comedy Theatre, Flappers Comedy Club, the Second City, and the Laugh Factory.

Amy Tee — “Not every crazy looks crazy,” says Amy, the comedian and motivational speaker who brings her boyish charm and dry wit to the stage with a storytelling style that shifts between stereotypes and reality. She delivers comedy with stigma-busting honesty. “I feel alive,” she says of the work. “I’m candid and exposed yet still fully clothed. Identified by the Boston Globe as a comedian to watch, and in Curve magazine as one of the “funniest lesbians in America,” Amy toured nationally and was a featured comedian in the film, “Laughing Matters — The Next Generation.” She remains a fixture on the comedy circuit, is a regular performer at the Boston Comedy Festival, and has been featured on Sirius XM Satellite Radio and the LOGO television network.