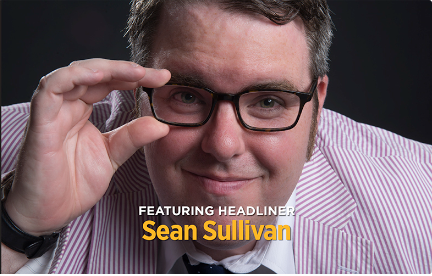 Fugitive Comedy hosts some of the best and brightest comics working in the Boston area and nationally. The comedians who have joined us have appeared on The Late Show with Stephen Colbert, The Tonight Show with Jimmy Fallon, Conan, David Letterman, Late Night with Seth Meyers, Last Comic Standing, America’s Got Talent, Comedy Central, The Jim Jeffries Show, Comedy Bang! Bang! Live! Podcast, NPR’s Commonwealth Journal, Lifetime’s Girls Night Out — and have opened for numerous well-known comedians in clubs around the nation.

Tonight: Four Comics, Featuring Headliner Sean Sullivan
Sean has cemented himself as a stand-out comedian in the legendary Boston comedy scene. With his quick wit and sharp jokes, it’s no wonder Sean was crowned 2022’s Funniest Person in Massachusetts or that he was selected to perform at the very top venues in New England including the Wang Theatre, Laugh Boston, and the Boston Calling music festival. After making his national television debut on Comedy Central, Sean has been consistently relied upon to deliver laughs all across the nation.