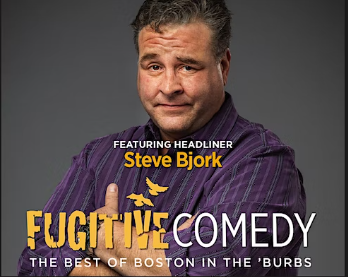 THIS SHOW IS SOLD OUT, but we’ve got another Fugitive Comedy show coming on March 3.

Fugitive Comedy hosts some of the best and brightest comics working in the Boston area and nationally. The comedians who have joined us have appeared on The Late Show with Stephen Colbert, The Tonight Show with Jimmy Fallon, Conan, David Letterman, Late Night with Seth Meyers, Last Comic Standing, America’s Got Talent, Comedy Central, The Jim Jeffries Show, Comedy Bang! Bang! Live! Podcast, NPR’s Commonwealth Journal, Lifetime’s Girls Night Out — and have opened for numerous well-known comedians in clubs around the nation.

Steve Bjork (Headliner) — The Boston Globe recently described Steve Bjork as “one of the top names” in New England stand-up comedy. He’s come a long way from his nights of frying up mozzarella sticks in the back room of a popular Boston comedy club. Today, Bjork is a polished veteran of the highly competitive Boston comedy. His material is intelligent and accessible, but first and foremost, it is funny.  Bjork takes everyday life and turns it upside down in a way that every demographic in any given audience can enjoy. Steve has performed at all of the major Boston and New England comedy clubs in addition to clubs throughout the country.

Becca Wolinsky is a future physician by day and Boston area stand-up comedian by night. She uses stand-up to pay her medical school tuition. You can find her telling jokes and occasionally tap dancing in her hotdog suit all over New England. She also hosts and produces a monthly show in Somerville called Rebel Hen Comedy, featuring underrepresented comedic voices in the area.

Gary Petersen (Host) — A rising performer, Petersen was named best comedian by Boston Magazine. He has opened for his favorites like Maria Bamford, Gary Gulman, and Jake Johannsen and has written for Team Coco and Comedy Central.

The Fabelmans Scroll to top