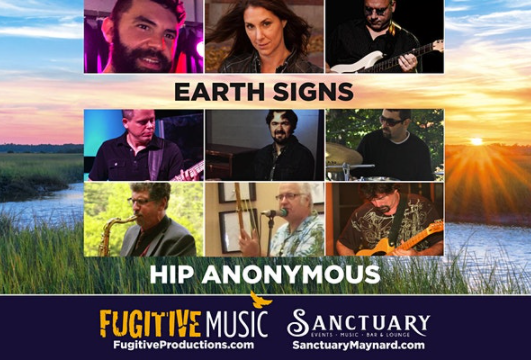 Alison Keslow — Has shared the stage, recording credits, and supported artists including Victor Wooten, Joan Armatrading, Jerry Marotta, Tony Levin, John Sebastian, saxophonist Mindi Abair, and many more. Besides being an active sideman, Alison has two albums out as a leader, “Between Earth and Sky” and her current release ” Bass Dharma.” A Berklee grad, she was nominated for a Boston Music Award for Artist of the Year in both 2017 and 2018.

Perry Bakalos — A funk-rock guitarist and bassist from from the start, he later waded into the waters of jazz. “The music that I really dig is diversely influenced by Funk, Prog-rock, Classical, Mediteranian-folk, Latin, Greek, European Gypsy, Jazz, Blues . . . a fusion of styles. Improvisation is the most satisfying thing to do for me musically, within a musical framework and constraints.” He won a People’s Choice Award in the 2013 IMA’s for best jam/funk/fusion tune.

Aaron Robertson — Began drumming at an early age and those countless hours spent practicing lead him to tours in the US and Europe. A graduate of Berklee, he continues to call Boston home, playing with a handful of regional bands.

Hip Anonymous is about funk, groove and interplay, mixing many styles of music into a cool soulful stew. They do instrumental originals and covers with creativity, conjuring up little surprises here and there.

Richard Graham — Improvising world percussionist and ethnomusicologist who has collected songs and instruments from anthropological research trips to Brazil, the Caribbean, Europe, and the US. He is also a Lincoln Center teaching artist as well as a recording artist for the Inside Sounds and MuWorks labels.

Jordan Gravel — Versatile Hammond B3 organist and keyboard player who performs around the Northeast. He studied jazz at the College of Charleston in South Carolina, where he performed regularly in various trios and quartets. It was there that he released his first two albums

Book Launch: The Artist and the Orchard: A Memoir by Linda Hoffman Scroll to top