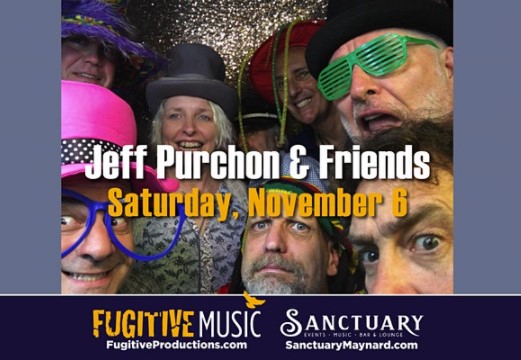 British guitarist Jeff Purchon and his all-star band bring their special brand of soul, blues and funk—with a side order of rock—to life.

British guitarist Jeff Purchon and his all-star band bring their special brand of soul, blues and funk — with a side order of rock — to life, rousing a crowd to their feet and leaving them wanting more. Jeff has performed with some of music’s greats. At the age of 17 he was signed to EMI records and was playing in a warm up band for renowned acts like Black Sabbath, Free, Genesis, Robert Palmer and others. He toured with Noel Redding (ex Jimi Hendrix), Clive Bunker (Jethro Tull) and during his career has played with Robert Palmer, Ginger Baker, Buddy Miles, Steve Holley (Wings), and Mick Ronson (Bowie).

His band features nine-pieces with two female singers; Stax recording artist Suzanne Buell, and Fenway favorite Vicki Zelski. Boston’s own Michael Payette, who possesses a range and voice that can cover any song from Michael McDonald to Stevie Wonder, is the lead male vocalist. The world-class rhythm section includes New York’s Ron Pastore on bass, keyboardist Steve Aubert, Philip Antionades on drums, and Percussionist Hal Denham. The line up is rounded out with the inimitable saxophonist Brad Kohl.

JP & Friends will rock your butts off with a variety of music that hits everyone’s sweet spot, with classics old and new. They play a multitude of private gigs and have won a Gold Award as one of the best performing bands on their agency’s roster. Come on down and boogie out.

Author Talk with Edwin Hagenstein (The Language of Liberty: A Citizen’s Vocabulary) Scroll to top