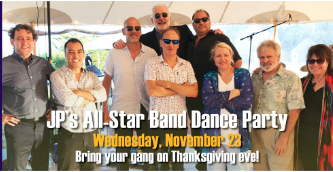 British guitarist Jeff Purchon and his all-star band bring their special brand of soul, blues, and funk — with a side order of rock — to life, rousing a crowd to their feet and leaving them wanting more.

Traditionally known as Black & Orange Night in Maynard, the night before Thanksgiving is a great time to reunite with old friends who are home for the holidays. Join us as we kick off the long weekend with JP’s dance party at Sanctuary. The band will cover a wide range of songs from soul to funk to rock to blues to pop and back again, all aimed at getting you on your feet and losing those pounds before you put them back on again.

Jeff Purchon has performed with some of music’s greats. At the age of 17 he was signed to EMI records and was playing in a warm up band for renowned acts like Black Sabbath, Free, Genesis, Robert Palmer and others. He toured with Noel Redding (ex Jimi Hendrix), Clive Bunker (Jethro Tull) and during his career has played with Robert Palmer, Ginger Baker, Buddy Miles, Steve Holley (Wings), and Mick Ronson (Bowie).

JP’s All-Star Band will rock your butts off with a variety of music that hits everyone’s sweet spot, with classics old and new. Come on down and boogie out.