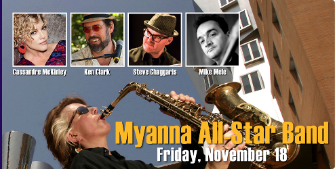 Legendary Boston-based saxophonist Myanna has invited some very talented collaborators to join her on the Sanctuary stage.

Myanna, one of the hottest saxophonists around, plays music that mixes jazz improvisation with funky rhythms, expressive playing, and catchy tunes. Featuring her soulful sounds, versatility, and unique arrangements, she performs regularly in clubs and concert halls with her own group, with the Love Dogs, and as a featured artist in a number of highly-regarded bands. She has won awards for Best Jazz Artist several times from both the Boston Music Awards and The Boston Phoenix readers poll. Myanna has recorded three or her own CDs, is featured on multiple recordings with The Love Dogs and as a side player on many other recordings.

Cassandre McKinley started a career in film and television as a kid and by 16, she had already signed with a New York talent agent. McKinley is best known for her powerhouse voice and stylistic versatility and ability to cross genres effortlessly. She is renowned for her spirited and emotional performances with a presence on stage that is exuberant and passionate yet warm and disarming. She has shared the stage, and in some cases, recorded with greats such as Peter Eldridge (New York Voices), Duke Levine, Dave Mattacks, Dick Johnson (Artie Shaw Orchestra), Clay Osborne, Bernard “Pretty” Purdie, Fred Lipsius (Blood, Sweat and Tears), Jerry Portnoy (Eric Clapton, Muddy Waters), the legendary Herb Pomeroy and others. McKinley has toured nationally and overseas and her music can be heard on over 500 national and international radio stations, cable and internet music outlets including iHeartRadio, Spotify, Pandora and XM Radio.

Performing with Myanna is one of the finest jazz organists around, Ken Clark. He was voted “Winner of New England Blues Society, Keyboardist of the the Year” four times between 2006 and 2015. Ken’s technical ability joined with his natural feel for funk and soul make each performance a night to remember.

Steve Chaggaris is a drummer/performer/session musician, and graduate of Berklee College of Music. He has amassed an extensive performance résumé, with appearances throughout North America, Europe, and Japan. He has performed and/or recorded with a wide array of artists, including Amy Fairchild, Doug Hammer, Michelle Willson, Jody Blackwell, Chris Stovall Brown, and The Soul Band. He has been a longstanding member of the Ken Clark Organ Trio and appears on five KCOT studio albums.

Doors open at 7pm • Performance starts at 8pm
Full bar • Order dinner in one of Maynard’s many fine restaurants and bring it with you
Tickets $18/advance, $22/door

The Banshees of Inisherin Scroll to top