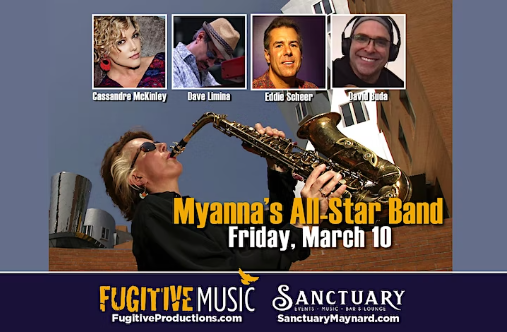 Legendary Boston-based saxophonist Myanna has invited some very talented collaborators to join her on the Sanctuary stage.

Myanna, one of the hottest saxophonists around, plays music that mixes jazz improvisation with funky rhythms, expressive playing, and catchy tunes. Featuring her soulful sounds, versatility, and unique arrangements, she performs regularly in clubs and concert halls with her own group, with the Love Dogs, and as a featured artist in a number of highly-regarded bands. She has won awards for Best Jazz Artist several times from both the Boston Music Awards and The Boston Phoenix readers poll. Myanna has recorded three or her own CDs, is featured on multiple recordings with The Love Dogs and as a side player on many other recordings.

Cassandre McKinley started a career in film and television as a kid and by 16, she had already signed with a New York talent agent. McKinley is best known for her powerhouse voice and stylistic versatility and ability to cross genres effortlessly. She is renowned for her spirited and emotional performances with a presence on stage that is exuberant and passionate yet warm and disarming. She has shared the stage, and in some cases, recorded with greats such as Peter Eldridge (New York Voices), Duke Levine, Dave Mattacks, Dick Johnson (Artie Shaw Orchestra), Clay Osborne, Bernard “Pretty” Purdie, Fred Lipsius (Blood, Sweat and Tears), Jerry Portnoy (Eric Clapton, Muddy Waters), the legendary Herb Pomeroy and others. McKinley has toured nationally and overseas and her music can be heard on over 500 national and international radio stations, cable and internet music outlets including iHeartRadio, Spotify, Pandora and XM Radio.

David Buda has been a mainstay on the Boston music scene for decades. In addition to teaching at Berklee, he performed with the Boston Pops for 15 years where he had the opportunity to perform with the orchestra’s guest artists including Mary Chapin Carpenter, Amy Grant, Vince Gill, Patti LaBelle, Take Six, John Williams, Bono, Martina McBride, Aaron Neville, and New York Voices. He has performed in the pit for many Broadway shows including Rent, Joseph, Letters from Saigon, Grease, Miss Saigon, Legally Blonde, Hair Spray, and Jesus Christ Superstar.

Drummer and vocalist Eddie Scheer has been one of the pillars of the Boston Blues/R&B scene for over 20 years. As the leader of his award winning band The Love Dogs, he’s toured the U.S. and Europe and recorded four critically acclaimed CDs. He’s played with virtually every top level musician in the Northeast at one time or another, and has hosted his “Tuesday Night Allstars” series in Brighton for over a decade. His encyclopedic repertoire is surpassed only by his big smile and love of entertaining.

Full bar. You’re welcome to bring snacks and/or take-out dinner from one of Maynard’s many fine restaurants and bring it with you.