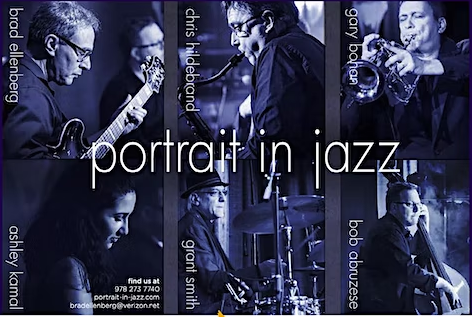 Portrait In Jazz is a dynamic, original jazz band committed to creating exciting and meaningful  music with more than 50 originals and hundreds of jazz standards in their repertoire. This performance will feature a balance between originals and time–honored jazz classics!

Bob Abruzese (Bass) — Boston-based bassist Bob Abruzese has been a fixture on the Boston music circuit since the early 90s. Bringing a tasteful mix of jazz, blues, soul, and funk to his playing, Bob enjoys performing a variety of styles and types of gigs. A Berklee alum, Bob has studied privately with Bruce Gertz, Ed Friedland, and others. He has performed with countless talents, including Shirley Lewis, Boston Baked Blues, Amyl Justin, Jason Ricci, Jerry Portnoy, Kenwood Dennard, Herman Johnson, Portrait in Jazz, and many more. He has toured throughout the US and Europe playing in clubs and festivals.

Gary Bohan (Trumpet/Flugelhorn/Composer) — Gary has performed and recorded with Portrait in Jazz (formerly the Brad Ellenberg Quintet), Jazz Composers Alliance Orchestra, Jazz Echo, and Naftule’s Dream. For 10 years, he recorded and toured throughout North America, Europe, and Australia with the Klezmer Conservatory Band, including with Itzhak Perlman’s “In the Fiddler’s House” project, which resulted in a PBS documentary and two best-selling recordings. As a composer, Gary has contributed some beautiful compositions to the Portrait In Jazz repertoire. He is the author of “Sharkey: When Sea Lions were Stars of Show Business (1907–1958)” on Excelsior Editions (SUNY Press)

Brad Ellenberg (Guitar/Composer) — Brad has been performing professionally since the 80s in many diverse settings, ranging from a duo to a 20-piece big band, from founding Portrait In Jazz to performing in the pit on numerous shows over the years, filling the role of band leader and freelance guitarist at various stops along the way. He has toured throughout the Northeast US and in England. Having received his Master’s in Jazz Composition at New England Conservatory, many of his compositions comprise the original repertoire heard on the first three CDs from Portrait In Jazz: “Rendezvous,” “Return Engagement,” and “Metamorphosis,” with at least 20 more still unrecorded.

Chris Hildebrand (Sax) — Chris has been passionate about jazz since hearing his first Charlie Parker album in high school. He attended Berklee College of Music on scholarship and Northern Illinois University, playing lead alto for Frank Mantooth’s Jazz band at NIU. After playing as a full-time musician in Chicago in multiple swing and society bands — including some well-known groups like The Temptations and The Four Tops — he obtained a degree in electronics engineering. Since relocating to the Boston area, he has expanded his playing, being influenced by many styles and great players, including funk, gospel, and contemporary jazz.

Ashley Kamal (Vocals) — Ashley is a recent graduate of Brandeis University where she studied Applied Mathematics and Vocal Performance as a Leonard Bernstein Fellow. She began singing before she could talk (there is video evidence) but started training classically in middle school. While her repertoire includes music that spans the decades from the 17th century to today’s current hits, she feels a special affinity for the music being created while singing and interpreting jazz standards with Portrait In Jazz.

Grant Smith: (Drums/Percussion) — Grant has traveled many paths in world music, jazz, classical, and dance. His theater credits include “Shlemiel The First,” as well as Joel Grey’s “Borscht Capades.” He has toured globally from Krakow to Thailand. He performed with Itzhak Perlman on “In The Fiddler’s House” and the PBS Great Performances show “Rejoice” with Cantor Helfgot. Grant has played on many memorable stages along the way including Boston Symphony Hall, Carnegie Hall, The Hollywood Bowl, and Washington DC’s Kennedy. Grant was also in the Yidstock All Stars band at the Yiddish Book Center’s annual festival.