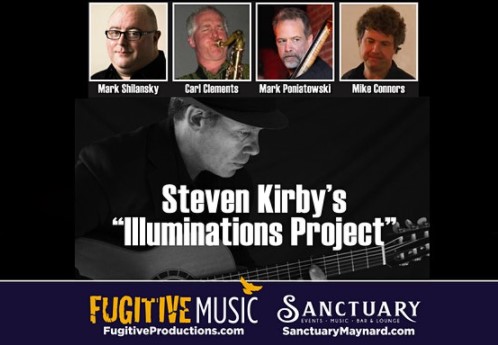 The concert features Kirby’s original compositions which have been compared to the Pat Metheny Group along with some of his unique and appealing arrangements of well-known songs like “Over the Rainbow” and the Fairport Convention classic “Who Knows Where the Time Goes.” Kirby’s music has won awards from the International Songwriting Competition, Billboard, and Downbeat Magazines. This is not cerebral jazz, it is heartfelt lyrical music with uplifting energy and remarkable beauty.

“Steven Kirby, a guitarist of rippling technique and a poetic mind, has developed a modern jazz guitar style that bridges the angular lyricism of Pat Metheny and the painterly asceticism of Jim Hall.” — Brian Zimmerman, Editor’s Pick, “Downbeat”

Carl Clements (Sax/Flute) is one of the premier jazz woodwind musicians in the Northeast. With degrees from Berklee College of Music and CUNY, he has performed at jazz festivals and concerts in Germany, Czech Republic, Netherlands, Japan, Malaysia, Thailand, India, Dubai, and throughout the USA. Carl has appeared on numerous recordings and has performed with a long list of eminent musical artists including Luciana Souza, Rez Abbasi, Ralph Alessi, Ravi Coltrane, George Schuller, and many others.

Mark Shilansky (Piano) — Throughout his creative career as a pianist and composer of his own material, Mark has also been a consistent presence as a sideman. A tenure throughout much of the 90s as a member of the Luciana Souza quintet led to his almost ubiquitous presence as an accompanist of vocalists, such as Lisa Thorson, The New York Voices, Kris Adams, Carolyn Leonhart, Rebecca Parris, and Patrice Williamson. Since 1997, Mark has taught at Berklee College of Music, teaching Ear Training, Arranging, Harmony, and Ensembles. He also has taught Jazz Piano and Ensembles at the University of New Hampshire since 2002

Mark Poniatowski (Bass) is a bassist and arranger with degrees from Berklee College of Music and the New England Conservatory. Playing both the electric and acoustic bass, his performance highlights include Sid Caesar, Floyd Dixon, Janiva Magness, Rita Moreno, Bob Newhart, and Junior Watson, The Nutcracker with the Franklin Performing Arts Company; the Manchester Jazz and Blues Festival with the Toni Lynn Washington Band; the Boston Blues Festival with Joe Bargar and the Soul Providers; The Music of Gershwin and Porter with Rebecca Parris; Eric in the Evening, WGBH radio on-air performance and the Boston Globe Jazz Festival with the Bruce Katz Band. He released an original big band recording “The Mark Poniatowski Situation,“ which includes original jazz compositions and arrangements with some of New England’s most prominent jazz players.

Mike Connors (Drums) studied jazz drumming at Berklee with jazz greats Joe Hunt and Alan Dawson. He has toured internationally with the avant-pop group Combustible Edison, the Lillith Fair, Lisa Loeb, The Andre Rice Sextet, and several national Broadway tours including, Bye Bye Birdie and Anything Goes. Mike has also performed for/on television shows such as Dateline NBC, Regis and Kathie Lee, Felicity, Late Night with Conan O’Brian, and commercials for Cinemax, PBS, Microsoft, NPR and more. He has played on soundtracks for the films “Inspector Gadget,” “Fear and Loathing in Las Vegas,” “Gas Food Lodging,” and “Four Rooms.” As one of the most in demand sidemen in New England, Mark has appeared on dozens of recording projects of various genres.

Author Talk with Anders Morley: This Land of Snow