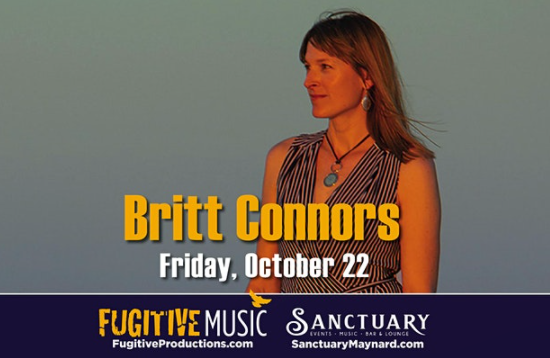 “When you have a wonderful instrument as supple as Britt’s mellifluous voice, it is a luxury that allows you to apply it to a wide array of styles. With a writing flair for beautifully lyrical compositions, it takes the possibilities even further. On her recently released third album, “Longitude,” Britt Connors and the vehicle of her voice roam all over the map. She skillfully plumbs every style from soul, to folk, to pop, to gospel- and country-infused jazz.” — Nate Dow, former writer for the Boston Herald

Singer/Songwriter Britt Connors was born and raised singing in small-town West Boylston, MA before taking her studies to Ithaca College in NY. But, the lure of the talented Boston singer/songwriter scene and the thought that she may someday try her hand at songwriting brought her to Boston in 2001. Her acclaimed 2010 debut “The Bad Side of Good” was released under her maiden name of Britt Sawdon and blended blues, folk, and country with jazz voicings and pop sensibilities. By the time she released her second album, “Warmer Season” in 2014, she had met and formed her backing band, “Bourbon Renewal,” and had written the songs with that sound in mind, with tunes that are alternately rockin’, country, sweet, rootsy, and New-Orleans-street-parade. The record needed its own category, so they started calling it “Y’all-Ternative” music. Britt continued to expand into the band’s sound, calling on even more of some of Boston’s talented musicians for her 2020 album, “Longitude.” On this third record, she slips nimbly and authentically between soulful ballads, pop-rock, and gospel-infused Americana, reminiscent of recent feminist-inspired albums by Sara Bareilles and The Highwomen.

This show at Sanctuary will be her first (and very belated) in-person celebration of the release of “Longitude,” released in May 2020 during the height of the pandemic. Playing with her will be “Bourbon Renewal” bandmates, including Ed Lucie on bass and backing vocals, Andrew Stern on guitar, Mike Connors on drums, and a special guest or two, to be announced soon.