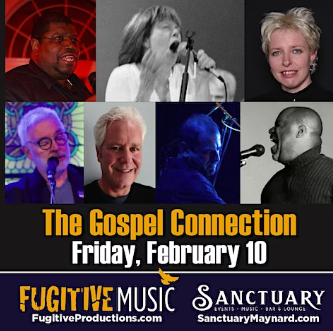 Join Suzanne Buell and her extraordinary group of singers and musicians in this, the fourth evolution, of her journey through traditional spirituals and stirring gospel music. Not only does Suzanne explore the roots of the traditional spiritual and historic gospel, but also the musical connections that inspire contemporary artists.

Suzanne Buell is a former Stax recording artist, and Boston Conservatory alumni. She appears as a regular soloist in the Boston Pops Gospel Choir, the Millennium Gospel Choir, the Boston Community Choir, as well as in the Oakland Interfaith Gospel Chorus. and Memphis Symphony Choir. She is a featured lead vocalist in several bands in the greater Boston area, and one of three lead vocalists for JP and Friends, a Boston-based professional band.

A Berklee College of Music alumni, Vicki Zelski is a life-long singer and instrumentalist. She was a member of the professional a cappella group “all so jimmy,” which won the New York Regional Harmony Sweepstakes competition and released their own recording titled “Seven Ladies Painted” the same year. She is a featured soloist for Boston Pops Gospel choir, and has sung with many Boston choirs including the Boston Community Choir, Millennium Choir, Tremont Temple Gospel Choir, Joyful Voices of Inspiration, and the UMC Euphonic Chorale.

An accomplished guitar and mandolin player, Chris Leadbetter is known for his voice, notably his harmonies. For more than 20 years, he was a core member of a popular cover band playing clubs and private functions around New England. He has also been featured on recordings and performances with local songwriters.

Mike Payette is a well-respected member of the Greater Boston music community — his bass playing and strong vocal ability are always in demand. In addition to his years of live performance experience, Mike has sung on numerous radio and television ads in the Boston market. His voice was prominently featured in a recent presentation at the Charles Hayden Planetarium in Boston’s Museum of Science.

Phil Antoniades graduated Berklee College of Music with a degree in Percussion and Music Synthesis, and has toured extensively throughout the US and the world. He has opened for the Spin Doctors, Van Halen, BB King, Indigo Girls, and Rusted Root, and has recorded with a bunch of professional local and national artists.

Born in Statesville, NC, Russell Watts grew up listening to classic soul, blues, and gospel music. His soulful presence is often requested at jazz, pop, and R&B gigs. Russell is actively involved with three vocal groups at New Hope Community Church in Ayer, MA, one of which had a brief stint at the Apollo Theater in New York. He has performed with local professional jazz artists, and is currently a member of several local groups, including Superfly and Atlantic Avenue.

Musical mastermind and accomplished pianist and vocalist, David M. Hunte, dedicates his life to exposing the gift of melodies through the brilliance of technology. He provides music to several groups, choirs, and events, not only as an accompanist, but also tailoring soundtracks to enhance the audience’s experience. Host of the interactive music show, “Quiet Time Piano,” David uses inspiration and melody to encourage others to find ways to grow their businesses regardless of the genre.