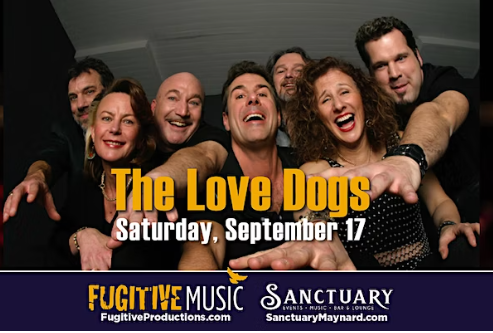 Take a red-hot horn—down and dirty. Add liberal amounts of barrelhouse boogie-woogie piano and stinging Fender guitar. Pour over a funky and swinging rhythm section that Blues Review magazine called “the best in the business,” and top it all off with a crazy and charismatic front man with one of the biggest blues voices around. Season with a few years on the road, tearing up juke joints, festivals, and concert halls across the U.S. and Canada and on both sides of the Atlantic. Sound tasty? It’s a recipe for music and mayhem, for intensity and irreverence; it’s THE LOVE DOGS.

The Dogs combine elements of jump blues, New Orleans R&B and early rock ‘n’ roll into their own powerhouse sound. “It’s important to us to have fun, and sometimes even we don’t know what we’re gonna do next,” says lead vocalist and chief songwriter Eddie “Duato” Scheer. “We have a lot of humor in our music, and we love to surprise each other and make each other laugh.

“We’re all lifetime fans of blues, jazz, and R&B, and we have a real reverence for the music. The whole is greater than the sum of its parts.” The band’s lineup consists of Scheer, Alizon Lissance (keyboards, vocals), Myanna (alto/tenor sax, vocals), Glenn Shambroom (guitar, baritone sax), Randy Bramwell (bass, vocals), and Steve Brown (drums, vocals).

Blues Review notes: “If there was a Superbowl for crowd pleasing Rhythm & Blues, a photo of The Love Dogs would be on every Wheaties box in America.” Scheer sums it up by saying, “If this band doesn’t put a smile on your face, check your pulse, because you just might be dead!”

The Mountaintop by Katori Hall Scroll to top