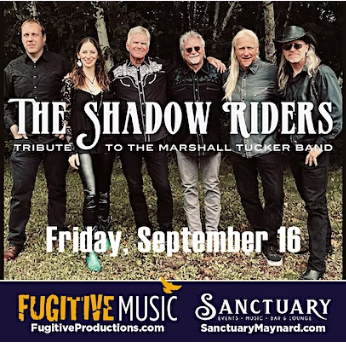 The Shadow Riders are a 6 piece band from the New England area, performing the music of the original Marshall Tucker Band. Fronted by singer, guitarist Bruce Marshall, who has assembled an all star lineup of musicians to faithfully create this timeless music.

Of particular note is the fact that Bruce Marshall played with Toy Caldwell, the lead guitarist, primary songwriter and co-founder of the Marshall Tucker Band. This gives the Shadow Riders a unique insight as to how this music was played, arranged and sold to the public.

The Shadow Riders is a name Toy Caldwell used for his backing group with Marshall in ‘89 and ‘90 and is the title for one of his songs.

This new stellar 6 piece ensemble performs hits like “Can’t You See”, “Take the Highway”, “Fire on the Mountain” and other popular tunes from their heyday like “Heard it in a Love Song”, “Blue Ridge Mountain Sky” and “This ‘Ol Cowboy” in addition to some “deep cuts” as well.

Marshall Tucker were known for their innovative melding of Country Blues, Southern Rock, Western Swing and Jazz. The Shadow Riders enthusiasm for this music is infectious and the stage show is engaging as they tribute to this iconic American Group.

The Mountaintop by Katori Hall Scroll to top