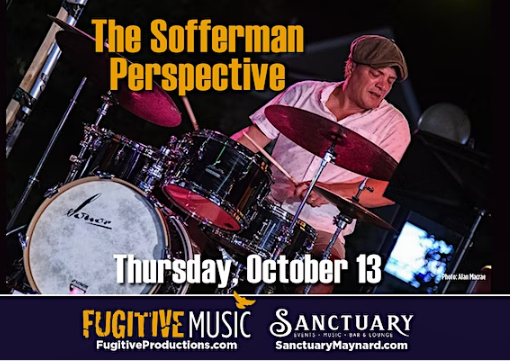 “Here is a promise: You will not hear a local jazz group play with more talent, more focus, more intensity than the quintet led by drummer Brooke Sofferman.” — Steve Greenlee, Boston Globe

Endorser of Sonor Drums, Istanbul Agop Cymbals and Vater Percussion, drummer and composer Brooke Sofferman is active on the Boston and New York jazz scene. With five CD’s out under his own name and dozens of rave reviews from publications like the Boston Globe and Downbeat, he also an in demand teacher. He has been teaching at the New England Conservatory, where he received his Bachelors and Masters degrees, for 20 years in addition to teaching at Berklee and UMass Boston. His original bands, The Sofferman Perspective, The Adventure Time Trio, and an organ duet entitled Lean 2, keep him busy along with the demand for Brooke as a sideman.

Adam Janjigian (piano)
After graduating from the University of Maryland with a degree in jazz piano, Adam worked for Carnival’s Cunard Line as a member of a dance orchestra aboard ocean liner Queen Victoria, and then took his talents to Princess Cruises, where he was the house-band pianist on five different ships. He has traveled to more than 60 countries, including Greenland, Australia, Thailand, Hong Kong and India. Adam now performs regularly throughout the Greater Boston Area at venues including the Beehive, Aeronaut Brewery, and many hotels and private venues.

Sean Farias (bass)
Sean can be heard performing with an eclectic array of performers throughout that area ranging in styles from jazz, avant garde, celtic, folk, pop/rock, and landscaping. He has performed throughout the U.S., Canada, Europe, and South Korea, and currently teaches at the Rivers School Conservatory.