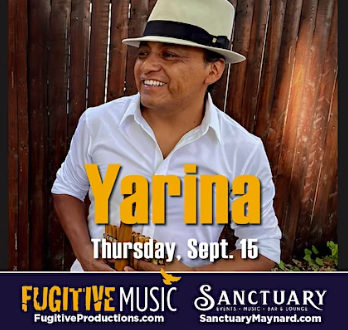 Artfully blending the ancient rhythms of its culture with original compositions that incorporate elements from various western musical styles, Yarina’s musicianship earned the group the title “Best World Music Recording” at the 2005 Native American Music Awards (NAMMYS) and “Best Folk Music Recording” at the 2005 Indian Summer Music Awards. Both were for its latest album, ÑAWI.

Yarina, which means “remembrance” in the native Kichwa language of the indigenous people of Ecuador has, since its inception, committed itself to maintaining musical excellence. Its concerts are hauntingly sensual listening experiences, but also displays of musical versatility, with more than 40 different instruments employed by band members, from the native windpipe and flute to the violin and a wide range of percussive instruments.

This band of siblings does much more perform music. Yarina is also dedicated to preserving and sharing the ancestral culture of the indigenous people of the Andes. The musicians that make up Yarina share the history and meaning of each song and instrument they perform. And its dancers, traditionally dressed in multi-layered, brilliantly-colored skirts and hand-embroidered blouses, blend traditional movements and original choreography.