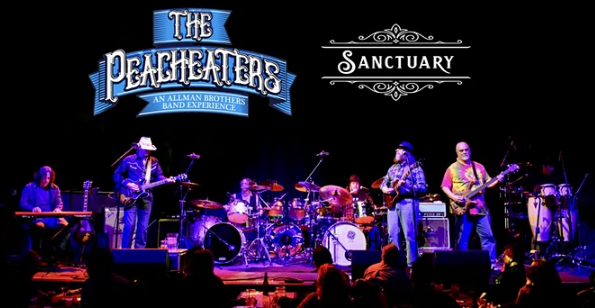 The Peacheaters dig deep into the 40 + year catalog of Allman Brothers Band music and deliver an experience like no other.

Fueled by admiration and passion for the music of the ABB, The Peacheaters have been rocking audiences for over 15 years. The Boston Globe, WZLX, Boston’s Classic Rock Radio, and many other media outlets have raved about the authenticity of the band’s performances.

From festivals to concert halls, the band’s success has taken them all over the U.S.—including performances at venues such as Showcase Live, The House of Blues, Daytona’s Bike Week, The Big House in Macon, GA, and B.B. Kings, NYC.

The band’s dedication to this music, and to “hitting the note” every night, has helped them build an loyal and ever-growing fan base. The “Peach” has won multiple Best Tribute Band awards, and shared the stage with legends such as The Outlaws, Melvin Seals (Jerry Garcia Band), Matt Abts (Gov’t Mule), The Zen Tricksters, and James Montgomery.

Photo I.D and proof of vaccination (or negative covid test taken from a medical institution within 72 hours of the event) required for entry.