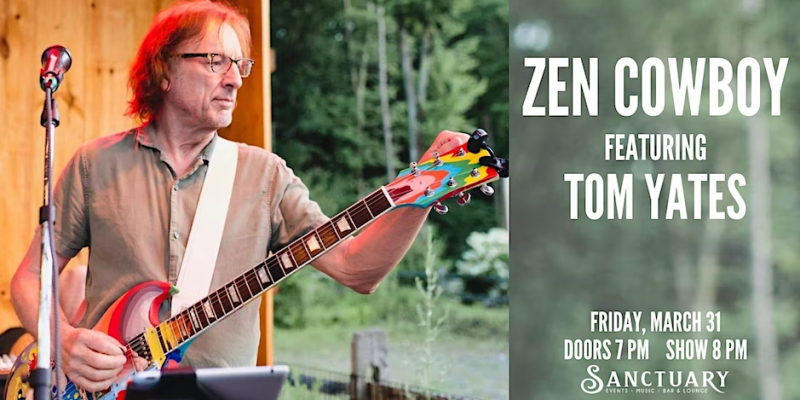 A Dance Festival of the Heart through Rock & Americana!

Who are Zen Cowboy?

Tom Yates—bandleader, vocal and lead electric guitar–is inspired first by the rhythmic groove and down-home voice of American roots music. Tom has performed and recorded in the genres of: rock, country, blues, R&B, soul, Motown, funk, folk, New Orleans, bluegrass, and gospel. His compositions in the rock and country vein have won awards and been aired on television dramas. In 2008, Tom Yates was named “New England King of the Blues” by the Guitar Centers of America.

Doug Lippencott on drums and percussion is a graduate of the New England Conservatory. He has performed with many of the area’s leading orchestras including the Rhode Island Philharmonic, the Boston Symphony, and Boston Pops Orchestras. Doug’s talents have taken him beyond the concert stage into the world of jazz, pop, R&B, and rock. He has had the pleasure of “gigging” with greats such as: Aretha Franklin, Ray Charles, Gil Evans, Johnny Mathis, Yes, Deep Purple, Brian Wilson, Kansas, the Moody Blues, and more. Doug has been on drums and percussion in the pit orchestras for countless productions staged at the Huntington Theater, the Wang, the Colonial Theater, the Opera House, the Providence Performing Arts Center, and Boston Lyric Stage.

Ric Maure on keyboards is a graduate of Berklee College of Music. Ric is a consummate Jazz musician with deep roots in the rhythms and melodies of Americana infused with a cool sense of comedy.

Nate Gerry on bass, vocals and flute is a self-taught phenome, a singer-songwriter, and “jack” of Americana and contemporary pop sounds. Nate’s wild-yet-easygoing groove together with his clear and beautiful voice will strike your heart open.